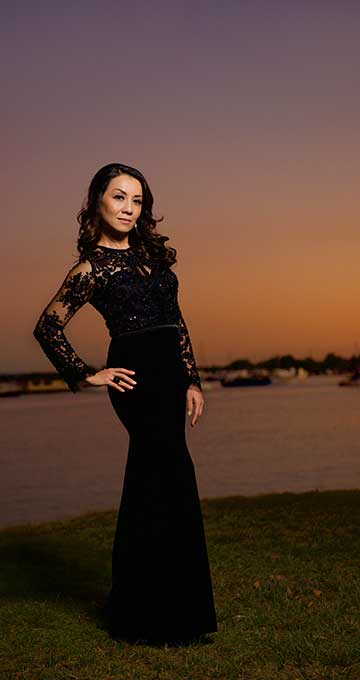 Brenda Lee is an Australian Eurasian of Portuguese, Dutch, Chinese, and Irish descent.

Born in Kuala Lumpur, Brenda grew up in historical Malacca before relocating to Perth, Australia in her early teens. Her diverse heritage of eastern and western influence adds colour and depth to this performing artist’s radiance.

Music was instilled by her late singer-guitarist father, Basil Lee. Brenda played piano, sang and danced at social and community events from the time she was four and continued as a professional dancer and choreographer with the Elevation Dance Troupe, performing at many communities, fashion and entertainment events in Perth, including Government House and the Hilton Hotel. Brenda’s musical career began, playing keyboards and vocals in various top forty, pop and funk bands.

Trained as a jazz vocalist at the Western Australian Academy of Performing Arts and the Sydney Conservatorium of Music, Brenda has traveled and performed in Sydney, Kuala Lumpur, New York and Canada with a diverse range of established jazz artists around the globe.

Brenda has also performed at the No Black Tie Jazz Club in Kuala Lumpur and has held long term residencies in Perth’s established jazz and entertainment venues – Benny’s in Fremantle and The Universal Jazz Bar, with regular jazz performances at the Burswood Intercontinental Hotel Resort and Casino (VIP and Atrium Cocktail Lounges), The Rose and Crown, Sittella Winery and The King’s Ambassador Hotel.

In March 2010, Brenda launched her classic jazz standards album at The Ellington Jazz Club in Perth.

Singing from her heart, this artist exudes a quiet sophistication which transforms any space wherein she performs.